Imperators wear patches of make-up on their foreheads and around their eyes.  They do not wear the white body make-up of the war boys. According to makeup designer Lesley Vanderwalt:

“The highest ranking Imperators covered their foreheads with black grease and used metal and mineral dust to highlight it.”

The makeup team used Kryolan Supracolor in black, with a matte metallic pigment brushed on top.

Black cargo trousers form the main piece of the imperator uniform. Some, but not all, appear to be US BDU-pattern trousers. The trousers have many pouches attached to them. Belts are leather and sit at the top of the trousers, sometimes high enough to cover the belly button. The belts might be custom, or they could be some kind of tool belt, similar to this one, that got modified.  The imperators have the flaming steering wheel logo suspended on a round piece of leather below their belts. The round piece of leather has small chains dangling from it.

They wear what appear to be a variety of modern tactical and combat boots.

On occasion, the imperators can be seen wearing goggles, but usually just hanging from their belts. The prime imperator can be seen with these goggles.

Most of the imperators wear leather fingerless gloves. 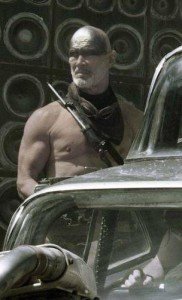 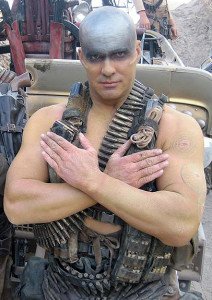 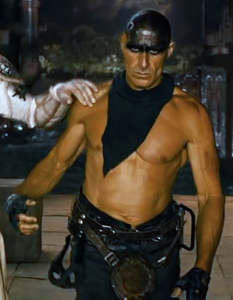